All Collections
found.ee Case Studies
How the North Carolina Brewers and Music Festival Sold More Tickets than Ever Before with found.ee Ads

How the North Carolina Brewers and Music Festival Sold More Tickets than Ever Before with found.ee Ads

A case study on how found.ee ads generated success for a regional music and beer festival
T
Written by Team found.ee
Updated over a week ago

Like every other festival promoter in the world, the pandemic hit the North Carolina Brewers and Music Festival (or NCBMF, for short) extremely hard.

NCBMF’s eponymous North Carolina Craft Beer and Americana Music Festival had come a long way since its inception in 2010; its 10th iteration in 2020 was set to be the festival’s biggest year, before the world came to a grinding halt.

When it was time to plan the festival’s return in 2022, NCBMF knew they had a big task ahead. Two years of pandemic-postponed events meant that the festival was competing against a lot of other players in the game. And the festival needed to do well in ticket sales; 3 years of losses could spell trouble for smaller regional festivals like theirs.

Event Producers Micah Davidson and Jeff Fissel got to work tackling the marketing challenges that faced their event. The festival had traditionally drawn more attendees with the beer tasting side of the festival than the booked talent, so they invested in an expansion of sound, bringing in artists like Jade Bird and Katie Pruitt.

“The promoters need a solution for top-of-funnel marketing, lead generation, AND conversions”

The team had primarily utilized paid social and radio advertising with past marketing efforts, but the drive for more sales amongst a new audience required fresh marketing tactics that could increase their reach. Furthermore, the regional-sized scale of the festival meant that NCBMF did not have the marketing personnel that other major festivals did; the promoters needed a solution for top-of-funnel marketing, lead generation, AND conversions.

Over the course of 2 months, the NCBMF team ran 5 found.ee ad campaigns, primarily utilizing GIF display banners as creative. To create awareness for the festival, found.ee’s premium custom domain targeting was used, which allowed the promoters to target premium music publications, along with specific regional/local news and media outlets with their marketing messaging.

Micah and Jeff also leaned into found.ee’s interest targeting, which allowed for the targeting of users with a high-propensity to buy music festival tickets (based off of contextual and behavioral data) AND craft beer, as well as fans of the poppier Americana sound they had booked.

As the day of show drew closer, NCBMF utilized found.ee to narrow the geographic targeting of their ads to a smaller radius around the event, in order to boost last minute “walk-up” ticket sales.

Found.ee’s remarketing pixels helped build an audience of users that had shown interest but had not converted; the use of found.ee shortlinks to fire pixels on their ticketing pages and social content helped further bolster the size of NCBMF’s remarketing audience.

In the last two weeks before the festival, a portion of the festival’s ad budget was used on found.ee ads, to reach their target audience, a combination of remarketing and finely tuned interest targeting available in found.ee ads. The strategy was a success. The found.ee ads NCBMF ran were able to garner a 5x ROAS (return on ad spend), selling festival packages ranging from $50 to $200 for all-inclusive camping passes.

“We realized our social ads were delivering a decent and profitable ROI of 1.5x but we were able to drive 5x ROI with found.ee ads, so it’s now going to be a bigger part of our budgeting every year!” - Micah Davidson, Event Producer & Talent Buyer

With the help of found.ee ads, NCBMF’s marketing efforts paid off. The 2022 festival is the highest grossing year to date, achieving the highest quantity of ticket sales in the history of the festival’s existence. 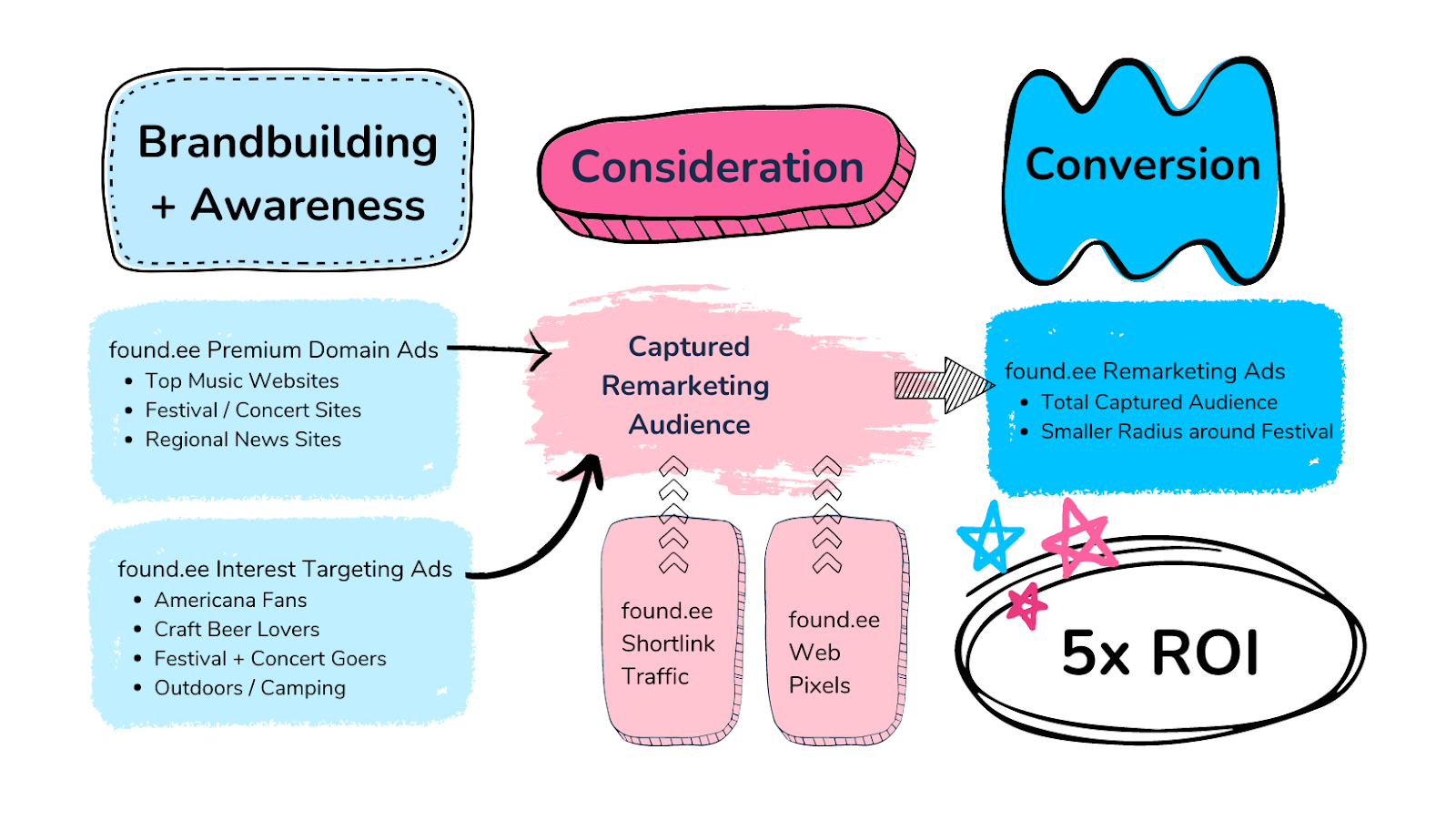