Read how found.ee ads and pre-save tools helped the band launch its first full-length album in 3 years
T
Written by Team found.ee
Updated over a week ago

“The success of the found.ee-powered ad strategy was immediately apparent. Found.ee quickly became one of the video’s highest sources of external traffic, with users averaging more than 2 whole minutes of watch-time.” 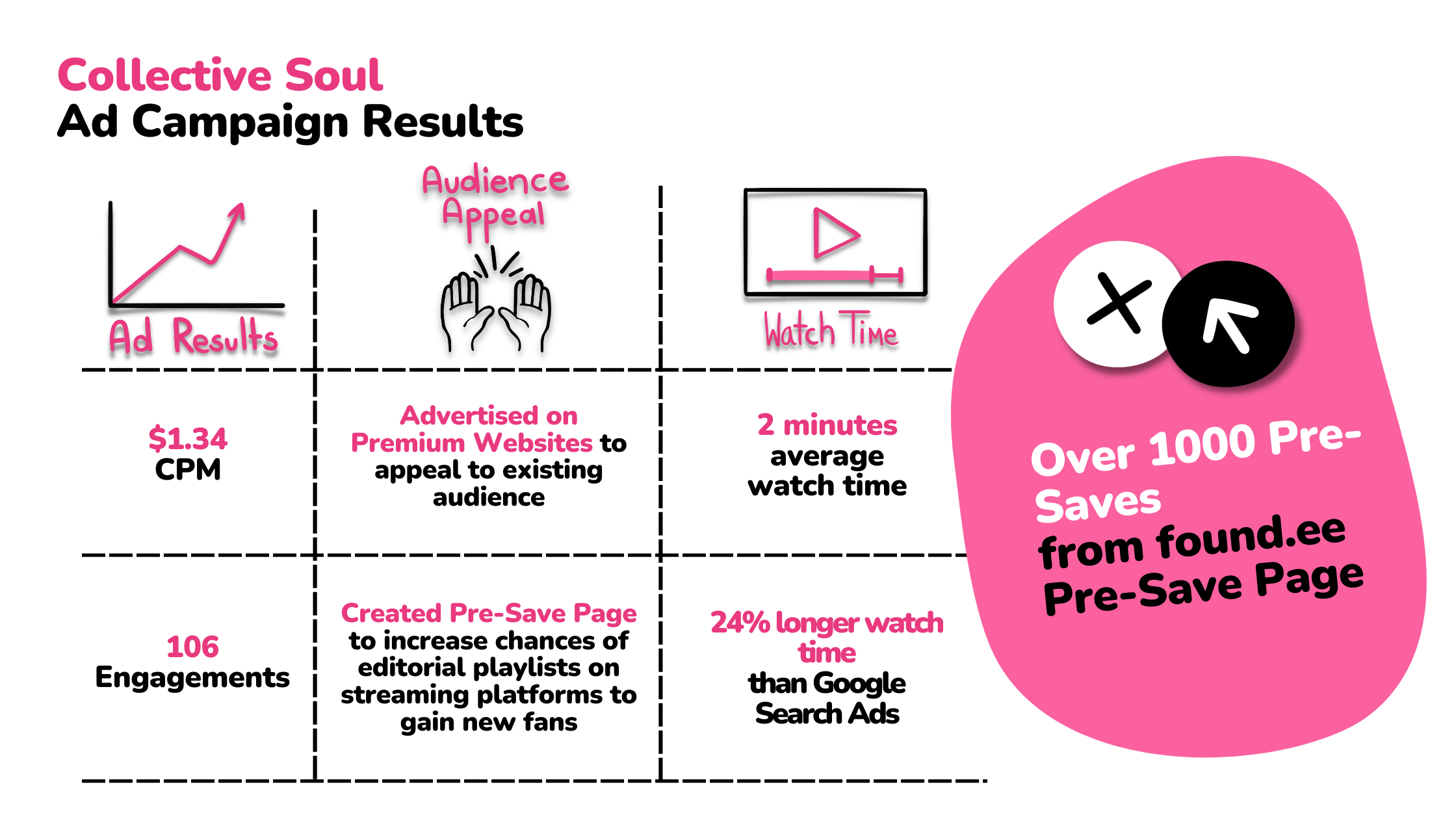 Georgia-based alternative rock band Collective Soul is not new to success; over a 30 year career, the band had done it all - from topping the charts to multi-platinum hits.

But any band with such a long and illustrious career knows that you can never guarantee that previous fans will stick around for the next album. Especially in today’s world, where media-consumption habits are more mercurial than ever.

With plans to release their new album ‘Vibrating,’ Collective Soul faced the eternal music marketing challenge of not only reaching new audiences, but also re-activating existing fans - a challenge that was compounded by the fact that the band had not released an album in 3 years.

The band engaged music marketing agency Blackstar to help tackle this challenge. Blackstar’s digital marketing consultant Matt Cohen got to work outlining a 2-pronged strategy that would appeal to both new and existing fans with Collective Soul’s new album.

To appeal to existing fans, the band needed a tool that would allow them to showcase their new music amongst people who were already familiar with their music. They could rely on their long-standing name recognition to produce engagement with their content, but they needed a mechanism that would allow them to get this content in front of relevant fans - many of whom are not on social media.

For his “existing fan” strategy, Matt utilized found.ee’s web and mobile ads to serve display advertising for Collective Soul’s album on notable rock websites like NME and Rolling Stone, where readers would most likely be familiar with the band’s earlier work. For the creative in the ad, Matt used found.ee’s HTML5 banner creation tool, which allowed him to embed a Youtube video for the album’s lead single directly into the ads that were displayed. The ease of use of these tools allowed Matt to deploy ads for the new video within a day of the video’s launch.

The success of the found.ee-powered ad strategy was immediately apparent. Found.ee quickly became one of the video’s highest sources of external traffic, with users averaging more than 2 whole minutes of watch-time - eclipsing the average watch-time of Youtube ads by 4x, and Facebook video ads by 40x.

Watch-time driven by found.ee even outperformed external traffic from Google Search by more than 23 seconds - particularly impressive, given the fact that users searching for a brand on Google are usually categorized as having the highest “intent to consume” amongst all prospective audiences.

For the second part of his 2-pronged marketing strategy, Matt used found.ee’s landing page generator tool to capture as many pre-saves and pre-adds as possible for the upcoming album, to encourage editorial playlist support that would, in turn, reach and attract new fans.

Collective Soul’s pre-save and pre-add page was shared with the band’s core audience via social and paid messaging. Over 2 weeks, the found.ee-powered page generated over 1000 total pre-saves and pre-adds, and also captured 1000+ new email addresses to message upon the album’s release.

Collective Soul’s upcoming album ‘Vibrating’ is available on Friday, August 12th. found.ee’s advertising and pre-save tools have ensured that the album will be met with support from both existing fans and new fans alike.